We would like to give you a picture of our organization and to explain its history. To begin, let us review basic information about the Shrine—what it is, who manages it and how it operates.

The major resemblance of Shriners International to any possible or near prototype existing in Middle Eastern Europe back in the sixth century is in its selection of names for its Temples; in its glamorous pageantry; in its colorful ceremonial and parade costumes and trappings, and its return to early history for the ritualistic lessons. 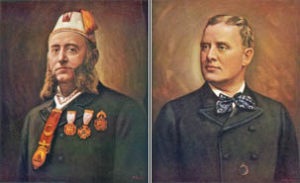 Billy Florence and Dr. Walter Fleming, the co-founders of the Mystic Shrine of North America, were more than passing good actors. Actor Billy Florence was reared to regard the world as a stage and the people as actors. Dr. Fleming could have earned a good livelihood as a juggler and magician. It was while on a trip to Europe that the great actor Florence was invited by a banker to attend a party given by an Arabian diplomat. The entertainment was something in an elaborately staged musical comedy; at the conclusion of which the guests became members of a secret society. Billy Florence realized immediately that here was a ritual that would be both impressive and amusing; something in which good fellowship would abound.

One of the first decisions made was that the Shrine should be restricted to 32nd degree Scottish Rite Masons and Knights Templars. A meeting called on September 26, 1872, in Masonic Hall, 115 East 13th Street, New York, for the purpose of formally organizing the first Shrine Temple in the United States. They gave the name of Mecca to this first temple.

Three years later a second Shrine Temple called Damascus was established in Rochester, New York. The order remained quiet and inactive for years. In the first report of membership which was not rendered until 1876 there were only forty-three nobles, all but six of them in New York City.

Fleming called a fourth meeting of Mecca Temple to be held June 6, 1876, at the Masonic Temple in New York. It was at that meeting that the Imperial Council came into existence.

Our headquarters are in Tampa, Florida, however, our two hundred Temples are located throughout North and Central America, Germany, and The Philippines. In addition, there is a vast network of Temples, Shrine Clubs and Oasises in North America, Central America, Europe, and Asia, all of which are under the authority of one or more of the Temples located in North America. The officers of the National Governing Body are called the Imperial Divan. Like the ritual, we have adopted Arabic names for these positions. The highest ranking officer is called the Imperial Potentate and his duties and authority are similar to the Chief Executive Officer of a large corporation. Each Temple elects representatives to the Imperial Council, which is the legislative body that makes our rules and elects the National officers.

Each Temple operates under a charter granted by the Imperial Council and must conform to the bylaws and rules established by that body. Reasonable autonomy has been given the individual Temples to execute Temple business and social activities of their own choosing. Each Temple has its own Potentate and Divan. They are responsible for the government and operation of the Temple in a manner similar to the Imperial Divan, all according to the laws of the Imperial Council.

Thousands of New Jersey Masons became Nobles of Mecca Temple. By 1901 there were over 1,500 nobles of Mecca who lived in New Jersey! Many of these members became charter members for our Salaam Temple. This mass of nobles prompted a desire to start its own Temple. A group of seven nobles from Mecca began to formerly explore the potential of locating a temple in what was then rural Northern New Jersey. The place of choice would be the Renaissance city of Newark, NJ.

Newark was a city on the rise. First being settled in May of 1666 and would follow with Robert Treat and Samuel Swain being the first recognized delegates to the city in 1668.

There were over 1,500 nobles from “Mother Mecca” who lived in New Jersey! In support of a new temple, there were 278 Nobles who signed on to begin the process of instituting a Shrine home in New Jersey. On March 14, 1903 the first formation meeting held at Damascus Commandery No. 5 of Knights Templar. Noble George Wiedenmayer was nominated and then elected to be the first Potentate of the new temple. He was elected by unanimous consent.

Following his election a resolution passed to elect the first recorder of  Salaam Temple. The resolution adopted, and Noble George C. Ward  elected the first Recorder.

Illustrious Past Potentate Charles A. Benedict of Mecca Temple appointed by Imperial Potentate Henry C. Akin to function as his Deputy to institute the new Salaam Temple. On March 30, 1903, a large delegation headed to a New York ceremonial held by Mecca Temple. There, Illustrious Benedict conducted Ill. Wiedenmayer to the center of the room and introduced him to the Potentate of Mecca Illustrious C.H. Heyzer and the nobility of Mecca temple as the Potentate of Salaam Temple. Laster that year the Temple was formerly instituted before a packed house at Kreuger Hall in Newark New Jersey on May 4, 1903 with Illustrious Charles A. Benedict, Past Potentate of Mecca officiating the ceremonies.

What’s in a Temple name?

“Did you know?”  After discussion, the first name proposed for our home was not SALAAM. It was offered by Noble Tyacke to be “ISMAIL.” However, objection to that name because of the Buffalo, NY location being claimed. Then, Noble Wilson Ely proposed the name of “ALLAH” and after considerable discussion adopted.

No sooner had the name been adopted, Noble Ely moved to rescind the resolution since there was objection by nobles with the premise that the proposed name was too “sacrilegious.”

Noble Andrew C. Vogt (70th charter member of Salaam) moved to adopt SALAAM as the Temple name. Seconded by noble Benjamin Skinner (charter member No. 182) after which, it was voted upon and adopted.

The 10,000th Salaam Shriner was created. Ill. Sir Curtis W. Merrill served as the first Potentate in our new home and Mosque located on Broad Street in Newark, NJ. On April 14 of 1926 the first function was celebrated with the Potentates Ball in the million-dollar Ballroom. In that year, membership was increased by 614 new nobles! The new building was met with great fanfare and excitement. It all began with a stated session back in 1920 on action initiated by Ill. Sir. Miles W,. Beemer. The Salaam Temple Realty Corporation got to work right away on designing a new Mosque. But it wasn’t until 1921 when Ill. Sir Edwin S. Bream employed an architect and fellow noble Jordan Green to establish a committee of nobles that were working as professional Architects. This committee of now thirty men formulated a proposal to build and presented it to Ill. Bream. The following year the land in which the new Mosque was to be built upon was paid off and we were now ready to commence building. In 1926 the long-awaited project was completed, and a new temple location was born. For the next 37 years the Mosque on Broad Street was our magnificent home.

For $63,000 in 1963 the Temple purchased ten plus acres of land in Livingston to erect a new mosque to call home. Architect and Noble Ian Horne prepared a model of the new location. In June of this same year, this final stage of permission to purchase was approved by the membership. The groundbreaking took place on August 24th, 1963 and the cornerstone was Masonically dedicated on December 7, 1963 with Corn, Wine, and Oil. The Grand opening took place on June 13, 1964 with a dedication honoring MW Roland J. Behrens, Grand Master of Masons, and the visit of Imperial Sir Harold C. Close, the Imperial Potentate!

Our last two locational spots included a leased space in Fairfield, New Jersey on Hollywood Avenue. This followed with our current and most recent Temple location of the Oasis of Whippany, NJ. The Fairfield location served as a transitional area until our Whippany purchase transaction completed in early 2018. Today, our latest location allows us to nimbler in the changing landscape of New Jersey Freemasonry and its appendant organizations. The current climate of fraternalism signals declining numbers on all levels of inclusion and activity. The societal implications of today signal a lower priority in fraternal activity such as ours. However, we believe we are better suited than ever to deal with the new normal we have become accustomed to administering, with a hope of the grand old days of member growth and participation. There will always be a need to support the world’s greatest Philanthropy of our Children’s Hospitals and the need for a continuation of Fun, Fellowship, and most importantly, Purpose.