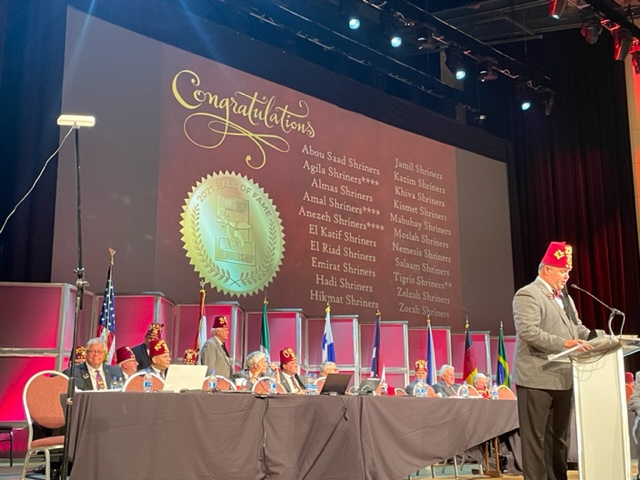 Thank you for electing me your Imperial Representative for the 15th time. I have finally achieved Iowa emeritus status and will be able to serve in this capacity for life.

Having an emeritus member gives Salaam Shriners an extra vote at the annual imperial sessions regardless of our temple membership level. It is probably worth considering that Salaam grooms one or two Nobles to be future Iowa emeritus representatives, if and only if, this Noble is willing to give one week per year for the rest of his life to serve. We can discuss this when our annual elections in December approaches.

The 148th annual session in Minneapolis took place in the first week of July. Some important bylaw changes came up for a vote. The following is the Reader’s Digest version of my report. For our younger Brother Nobles, RD is a family magazine founded 100 years ago. 😉

On a personal note, I was not elected SHC trustee on the philanthropy side. Although I received 541 out of the possible 900+ votes, I lost the election by 4 votes. It has been a great journey. I met many Shriners and made many friends during the many campaign trips all over the country. I had a ball in the process. I will continue serving our mission in our local area with the same enthusiasm and love.

On the fraternal side, I was appointed by our new Imperial Potentate Imperial Sir Kenny Craven to continue serving on the Imperial Jurisdictional Lines Committee. I was promoted to the 3rd vice president of Cabiri International Past Potentate Association.

Thank you, Ill. Sir Robert Howard Welch and the Divan, for attending the annual Cabiri International annual meeting and breakfast.